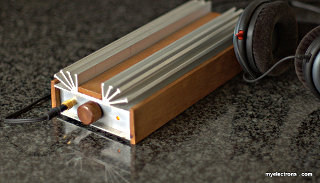 Flood in the Internet

These days search engines throw tons of schematics of "Class A headphone amplifiers" on us. There we can find anything: from monsters capable of driving big loudspeakers to humble OpAmps heavily loaded by 30 Ohms without any hope for help. The big wave of so-called hybrid headphone amps is scary: they look very high-end'ish, and I am the first one to advocate valves in sound reproduction, but mind you - using 15V at anode of ECC88 is insane.

Probably I would never be writing about this headphone amp schematic. But recently I observed one good man torturing a very decent vacuum tube with unreasonable low anode voltage and grid currents in a hopeless attempt to build what supposed to become his reference headphone amplifier. I tried to give him few hints here and there, but had to give up on that once he told me the model of the headphones he was building that monster for: that was some computer-grade thingy, "hi-fi model headphone intended for use with MP3 players and computer systems".

Today I am striving to avoid negative feedback loops in my audio designs. But this article is about a humble all-common-sense OpAmp-based headphone amplifier, the one that served me well for many years already since the last Century. It's easy and inexpensive to build, virtually does not require any tuning and yet can serve very sophisticated ears 😉

The ideas that this amp is build on have been found on the Net, obviously still in the last Century 🙂 Should you know the originator of this or similar layout - please drop me a note - I'd be happy to share the source with my readers too.

Let's take a quality operational amplifier and force its output stage into the real class "A" operation mode. For achieving that goal we simply need to load its output by a current source. The idea most probably belongs to Walt Jung and was first used in Philips DAC960 in nineties. As you know except the output stage all other OpAmp's guts already work in pure class "A". The effect of this trick that shifts OpAmp into the linear mode is illustrated in the article about the Wien bridge oscillator. There we used a budget OpAmp thus the effect was clearly visible.

Still the little OpAmp is not the best choice for driving 30 Ohms headphones. It cries for a current amplifier. Here we'll use easily available IR MOSFET's. Provided the complementary source followers idling at some 100 mA it will stay in pure class "A" while working on 30 Ohms or any other load with higher impedance.

The bias voltage on MOSFET's gates is developed over R5 with the same current that loads OpAmp and shifts it into the class "A". The only tuning that this layout might require would be setting the idle current through the source followers at around 100 mA. For tuning this idle current one may need to adjust value of R7.

A small film capacitor C11 of 100pF between OpAmp' output and its inverting input may proof useful in order to prevent oscillations when the amp is maxed out on output voltage (i.e. "clipping").

That's how I arranged this headphone amp into the box some x-teen years ago. Should I be constructing this today I most probably would put the transformer in a separate box.

Let me brag a bit about abilities of this humble creature 🙂 It once won a listening test against an all-tube amp. Both devices were loaded on a pair of reasonably low impedance and low sensitivity loudspeakers. By then it was the owner of the tube amp who admitted that my little silicone thing produced warmer and more honest sound and slightly better detailed stage.
Bottom line: if you need a decent headphone amplifier that is capable of driving not only 30 Ohm buds, but also audiophile quality 300 Ohm headphones and sometimes even sensitive loudspeakers - go ahead and build this one. It's cheap, simple, requires almost no tuning. Later on, when you are up to the serious vacuum tube based construction - this one will still serve you as a reference device to compare with 😉 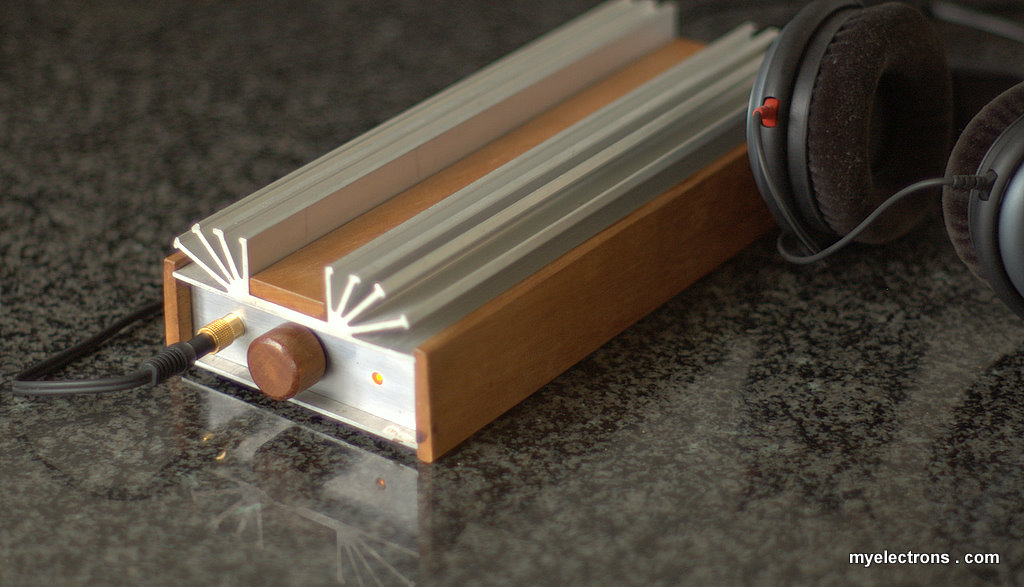 As I just mentioned above this device is capable of driving low impedance loudspeakers. In that case it might require slightly more meat in the power transformer and filtering capacitors. Still it won't be able to give out very high watts because the voltage swing is limited by the operational amplifier. Also please note that while working on the low impedance load the output stage will operate in a conventional class "AB" mode.
I guess the fact that you are reading this far might mean the topic was worth your time. I appreciate it a lot, honestly! It would be great if you drop me a note in the comments and also click those buttons below the text to let your friends taking a look at this simple yet very high quality headphone amplifier. Thank you!
>>> Site Map <<<

This site uses Akismet to reduce spam. Learn how your comment data is processed.