Recently I got myself couple of cool big CoolMaster computer cases. Anodised aluminium, plexiglas side panel and convenient block of USB-Sound-ESATA connectors... Being very pragmatic about computers I anyhow moved my current machinery into the new temples. The main goal of this move was to make them QUIET. Indeed, the monster cases had huge (read silent) fans, plenty of space for proper heat-sinking and arranging the air-flow. I even decided to glue some dumping material on that enormous back-cover. The day passed, everything has settled well and the machines ran much, much quieter than it was before. Till I sat to work a bit at night. There was that endless "RRR" sound. Not very loud, but it was something new in comparison to the old clunky sharp-edged iron boxes. Perhaps this "new" sound was always there and simply masked by the old little fans hissing aloud. Who knows, but that night it was unbearable. I soon realised the "RRR" was about 120Hz. No need to measure the frequency - you guess it quickly: that was the beat of 7200RPM hard drives. Most probably the big case made much better low frequency resonant chamber for them.

I did a quick marketing research,

Ever wondered why the heck mdadm & Co did not complain about failing drives, but the system was sluggish and blinked HDD activity LEDs as crazy? That's how it looked in my case: [root@lemon ~]# cat /proc/mdstat Personalities : [raid10] [raid6] [raid5] [raid4] md5 : active raid5 sda3[0] sdb3[1] sdc3[2] sdd3[3]      5809906944 blocks level 5, 64k chunk, algorithm 2 [4/4] [UUUU]      [============>........]  resync = 63.2% (1224003712/1936635648) finish=2185.5min speed=5432K/sec      bitmap: 1/231 pages [4KB], 4096KB chunk I was observing this very often, thinking that one of my new drives went wonky already. Not to worry about: it was simply the kernel that did not display checking correctly, instead it wrote resync. The following commands will reveal the real info about
One would think that whatever we put on the hard drive - the BIOS should start and let us configure the system parameters. WRONG. With the new "Advanced Format" (the name (c)WDC) 4096 bytes sector technology it's no longer the truth. I tried two mobos (desktop dg33tl & a server one) with what one would name "properly aligned partitions" on WD20EARS - both ceased on booting, even entering the BIOS menu was impossible. On one hand we want properly aligned partitions on our new tech drives: the write speed penalty for not doing so might be severe. It was 2 times slower in the quick tests I ran. IBM folks report up to 10 times worse writing performance in such case for certain conditions. On the other hand the machine must boot, right? A small investigation I conducted showed that the BIOS'es went wonky

For prototyping, or when reworking a PCB and in need to (re)solder small SMD packages, everyone suggests first to fix opposite corner pins with a gentle touch of a solder, and then do the rest of this juvelry work. Probably it works Ok with reasonably big SMD packages.This time I needed to fix a fleа size SSOP-20 (0.65mm pitch) on a minimalistic SMD-to-DIP adaptor. Certainly adaptor board did not want to stay still on my desk. But the worst thing was - how to hold that SSOP-20 well positioned while grubbing the soldering iron and then trying to touch pads _on_the_opposite_sides_! Mind you I have steady hands and am used to deal with tiny things right from my childhood.The solution came easy in the form of a sticky tape. I luckily had an aluminium one at hand. I believe that a paper one, used widely by painters - will do the job equally well. 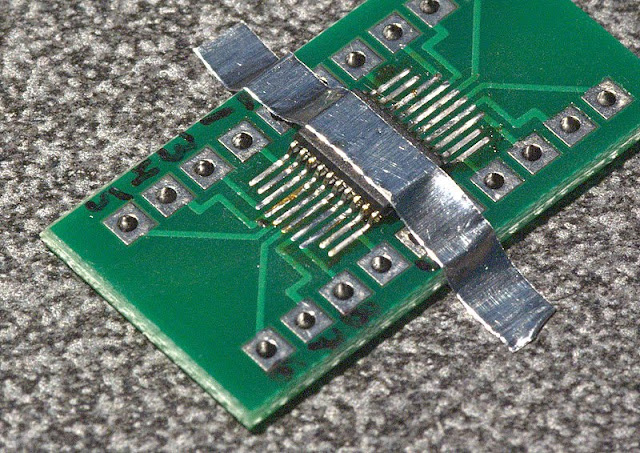 I used a little

[Читать на русском]
LM317 appears to be the most appreciated CCS building block amongst solder-slingers (term (c) John Broskie). Personally I never felt relaxed having such a complex OpAmp-based circuit in the audio-signal path. Nevertheless many routinely utilize this type of CCS in audio, including "pure" tube designs. Recently I was playing happily around cascoding JFETs and MOSFETs for the CCS in my own design.